Years ago, I came across a t-shirt which said, “Never ride faster than your angel”. I never really bought it but those words stay engraved in me.

Recently, Adu and I were riding from our GS Rider’s meet. We were on a clock and on the last day of our return journey, we had to cruise 850+kms from Belgaum to reach Chennai.

At 5:30 am, we woke the staff of Fairfield Marriot to check-out and ride out. It was cold, dark and foggy. Both of us had dark visors and no auxiliary lights on our BMW R1200 GS.

As we hit the highway, the fog was heavier. Visibility reduced to two-three bike lengths. Adu dropped the pace and I decided to take the lead, hoping I could push our way through. 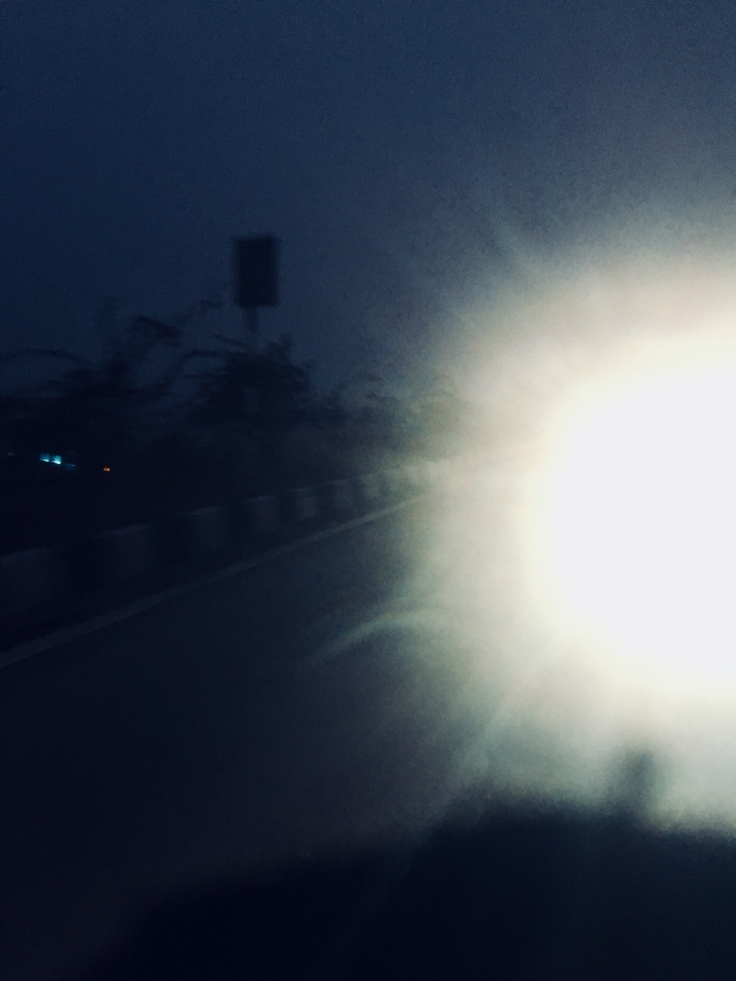 It was a struggle and we had two options left: park bikes on the side of the road and wait for it to clear, which means we will have to ride into the night or slowly find a way to ride it out. We chose the second option.

Our pace was around 60kmph. On the intercom, we tried to caution the other. With no warning sign, I saw a barricade pop right in front of me and the road turned left.  Without thinking, I turned left too. It was a road diversion (like most highway projects in India) and kind of woke us up.

As we continued to ride, Adu aligned his bike right behind me because it isn’t worth moving to any other side or lane. As we rode in this single file formation, my shadow was visible on the fog, a first for me. The outstretched arms looked like the wings of an angel and my helmet and the upper body seemed like the angel’s body. I felt that the man from above had sent his angel to help us. It was a very bold silhouette.

For another 30 mins, we probably covered only 20kms and then, the angel disappeared, only to show us another larger and more protective angel. It provided light, safe distance and acted as a shield. This angel came in the form of a Volvo bus (National Transport). We aligned ourselves right behind it and kept our pace and distance. His tail lights were like a lighthouse for a ship in troubled seas. Blind faith on those lights alone allowed us to ride with a lighter feeling. As he switched lanes, we would do so and as he braked we would slightly grab our brake lever. Temptations occurred in the form of either the fog clearing for a while or a car moving faster than this busy. We decided to stick to this angel.

It took us more than an hour-and-a-half to cover 60kms, which in normal circumstances, we would have covered in a jiffy but we never wanted to ride faster than our angels.

By 7 am, the fog cleared and the sun was out. We throttled out and waved to the “angel” behind the wheels and rode towards Chennai, knowing another invisible angel was guiding us home. I felt blessed.

Ride safe and remember, never ride faster than your angel.

The custom designed ChrisCross T-shirts for bike motorcycle, car enthusiasts are our novelty.

Story Behind The Design: Never Ride Faster Than Your Angel T-Shirt
March 3, 2020